Showing posts from September, 2010
Show All

Dust off your leg warmers, dig out your Adam Ant cassettes and brush that "mullet" we're going on a journey back to the 1980's for this one. Run2 the 80's will be a 2 day event in early June next year (date tbc later). Watch this space for further developments.
Post a Comment
Read more 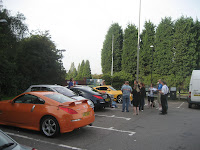 Once again BIG thanks to those who participated (plus a also those through unfortunate circumstances could only make the end venue). We all met bright and early at the McDonalds at Bassets Pole for breakfast. It was here that the "Shiney Shiney" (trophy) was unveiled. All of a sudden the "atmos" changed from friendly banter to something more sinister amongst the teams..... We were joined by a new team "Shocking Blue"(Roy and Martin) in a rather BLUE Vauxhall Astra VXR. Also joining us for the start only was Mr and Mrs Tangoman aka Paul and Jenny in an equally ORANGE Nissan 350Z (thank you for turning up and hope to see you on the next Run2). The next thing to do was to hand out the packs but with a strange bottle marked up "Peckham Spring".....???? One final group picture and it was to the cars. First stop was the Little Thief er I mean Chef on the A38 heading towards Burton, behind this the teams found a canal marina where the next clue/numbe
Post a Comment
Read more

Look at the Shiny Shiny 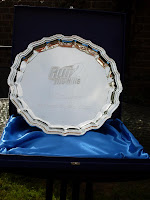